At IFA, Sony launches serious GoPro competition, finally becoming a real GoPro competor with the 60 fps 1080p video update after its predecessor and embedded SteadyShot image stabilization. Toshiba is launching the Camileo X-Sports box cam, with a similar rectangular design as the GoPro. As with the Sony cam, it comes with a display (2-inch LCD) and like all state-of-the-art action cams, packs a 12 MPixel sensor recording video at 1080p@60. A wristband is included, but this one does not look as fancy as the Sony one and does not have a display. Like the GoPro it also has WiFi functionality. The included waterproof package should be safe up to 60 meters of depth, drowning the Sony model. No specs on the "ultra-wide angle lens". Even cooler, they did enable the Electronic Image Stabilization feature in the (probably also Ambarella) board firmware, leaving GoPro (and the Contour cams) as the only high-end action camera without stabilization... Can you hear us GoPro? 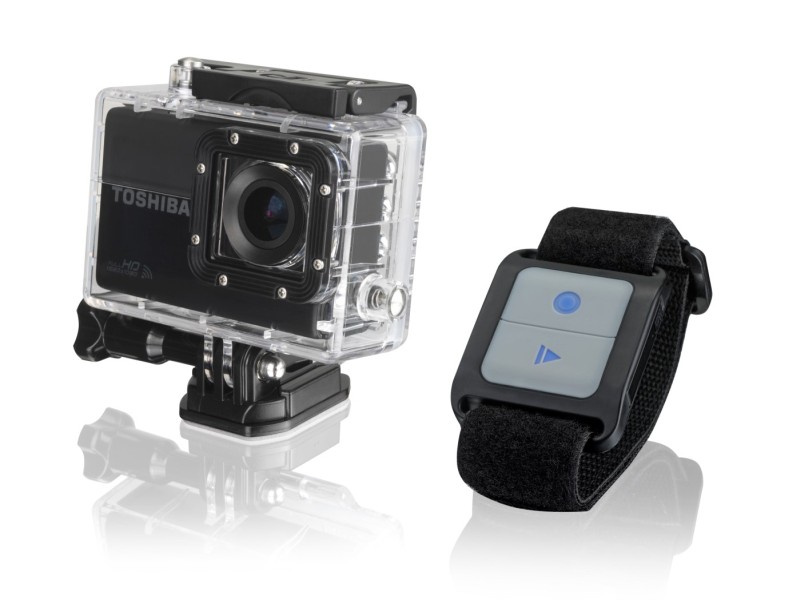 While 3D printers are getting more popular and can even be bought at Bijenkorf nowadays, you still need a 3D model in order to print one... Another cool KickStarter project is Fuel3D. They develop a hand-held 3D scanner that captures both photometric and depth information at high resolution. More geeky details at the KickStarter page.

An 0.5mm thick keyboard, who will need one?!

We all love geeky stuff, but who can tell me why one would need a 0.5mm thick printed keyboard. Mentioned by the company (at IFA) are tablets, but weren't these the devices that had a touchscreen with on-screen keyboard? Pretty awesome technology though. Everyone should have one on their kitchen table, just to show off...

After ParaShoot's wearable cameras competing with GoPro, Sony now introduces a serious competitor for the over-marketed GoPro cameras. Specs seem quite similar, but Sony also added a GPS sensor (data logged alongside the video) and NFC for communication with a smartphone. What GoPro still has NOT added (although it is possible from the firmware of the used video board inside the tiny package), is video stabilization, something that is stronly desired! The new Sony HDR-AS30V comes with the amazing SteadyShot features, which is seriously the only thing I miss in the latest GoPro package. Even cooler, the new Sony beast has the option to control recording and monitor the live feed from the optional RMLVR1 wrist-watch, YES, indeed, a wrist watch! Unfortunately, for the divers among us, it only operates up to 5m of depth... Video is recorded at the very pleasurable 1080p@60, still images at 12 MPixel and camera angle is about 170 degrees. Prices should be around $300.

We all love our GoPro! However, for the sneaky people who want to capture video unnoticed, its size and construction could be improved. That is what they guys who are working on the ParaShoot project must have thought. This new "ParaShoot" Kickstarter project promises a very pocketable camera, recording at 720p resolution and weighing less than 37 grams (1.3 ounces). Recording a Field-of-View (FOV) of 100 degrees it is not as wide as the GoPro, but its 45 x 45 x 15mm size almost fits inside the current Hero HD 3 models (60 x 42 x 26 mm). For me no reason to upgrade, plus the 1080p@60 mode is a blast! Anyway, if more competition means a reduction of the overpricing, count me in!